A new paper by Marcus Faro de Castro (“From Numbers to Post-Logocentric Normative Craft : On the Use of Indicators and Comparable Constructs in Contemporary Legal Analysis”) was presented at the 3rd ISA Forum of Sociology organized by the International Sociological Association (ISA). The event took place on July 10-14, 2016 in Vienna, Austria, at the University of Vienna.

The abstract of the paper is as follows:

The use of indicators for several purposes, including policy design and diffusion, has drawn attention from international organizations and legal scholars in recent years. Indicators are often seen as elements that make up “technical” (as opposed to “legal”) norms, and also as devices that link 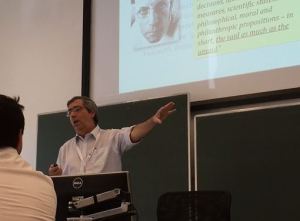 “scientific laws” to legal rules. One strand of argument explores the idea that law in some contexts has become subject to the influence of a “mathematical turn” coming from within “neoclassical” economics. The paper articulates some ideas about how legal criticism can be worked into the use indicators in contemporary legal analysis. The paper thus discusses, in stylized form, relevant relationships between law, taken as a social practice, and specialized means by which legal craft has sought to move “beyond” commonplace moralities of received worldviews. The paper suggests that, while rhetoric remained more linked to the development of political (not jural) ideas, the direct use
by jurists of dialectics, philology, history and the “emulated” use of mathematics (law more geometrico) have offered pathways for legal craft to attempt overcoming established moralities. The rise of statistics and accounting techniques has tended to occur within the bounds of the rationalist idea of a mathesis universalis. Yet, despite all these transitions, the question must be asked how far legal craft has remained a means to actuate the exercise power (thus keeping its role as logocentric craft, to use the language of Derrida). The paper finally suggests that the modernist transformation of mathematics — which paralleled the rise of modernist trends in art and aesthetics — and the emergence of computer technology and the internet have the potential of unleashing a process by which social coordination can be made to move beyond markets (as characterized by neoclassical economics) and become embedded into law revamped as a post-logocentric normative craft.

Other papers presented in the same panel were:

All papers were presented as part of the panel: The Futures We Want in Numbers: Searching Legal Indicators for a Better World. Abstracts of all papers can be found in the Book of Abstracts of the ISAConf 2016 (here).

The paper by Marcus Faro de Castro was elaborated in the context of the development of the research agenda of the Law, Economy and Society Group (LESG) of the Law School of the University of Brasília, which concentrates on the elaboration of the so-called Legal Analysis of Economic Policy (LAEP) approach (see here and here). The presentation of the paper benefitted from a grant generously offered by the Finatec Foundation of the University of Brasília.

All members of the LESG will have an interest in discussing the papers presented in the above panel of the ISAConf 2016.

This entry was posted on Friday, August 5th, 2016 at 10:59 AM and is filed under Contabilidade, interdisciplinaridade, Internet, Pesquisa em direito, Quantificação de direitos, Tecnologia/inovação. You can follow any responses to this entry through the RSS 2.0 feed. You can leave a response, or trackback from your own site.

One Response to Quantities and math in law: new discussions